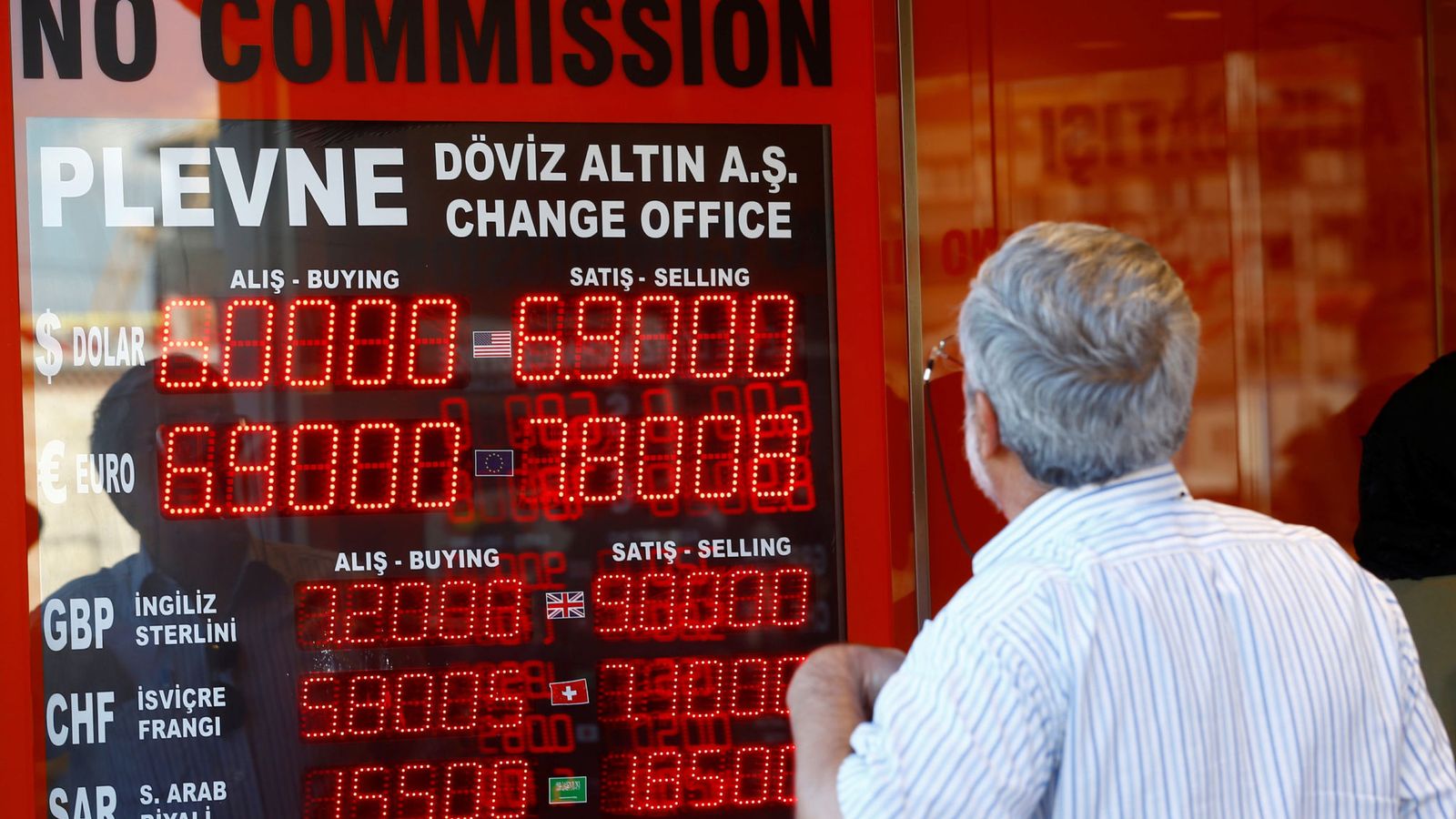 Turkey’s central bank has said it is ready to take “all necessary measures” to ensure financial stability following the collapse in value of the lira.

The central bank is vowing to provide “all the liquidity the banks need” and says it will “closely monitor the market depth and price formations”.

The action comes after the Turkish lira slumped to record lows against the US dollar amid an escalating feud with the United States.

In early trading on Monday it recovered slightly to 6.92 to the dollar after continuing to fall from an overnight record low of 7.24

The country’s banking regulator has also announced action, including limiting the ability of Turkish banks to swap the lira for foreign currency.

European markets, including the FTSE100, also opened lower, while the euro fell 0.3% to a one-year low against the dollar, as the nosediving lira drove demand in global markets for safe currencies including the greenback, Swiss franc and yen.

Investors fear the country’s financial crisis could spread, with a defiant President Recep Tayyip Erdogan describing the crash as a “political plot” against Turkey.

Turkey’s presidential spokesman Ibrahim Kalin has claimed the country’s economy “is strong and nobody should pay attention to speculative news and moves”.

Meanwhile, the country’s interior ministry said it was investigating 346 social media accounts which it said had “posted content provoking the dollar exchange rate”.

The conventional response to a collapse in the currency and a surge in imported inflation is to raise interest rates.

However, the central bank has defied calls from markets for rate hikes, raising concerns of interference from Mr Erdogan who is on record as describing himself as an “enemy” of higher interest rates.

“Investors need to see serious economic measures and not political ones to prevent things getting completely out of control,” said Hussein Sayed, chief market strategist at FXTM.

Turkish businesses have borrowed heavily in recent years and an estimated $300bn (£235bn) of that debt is denominated in foreign currencies.

Any fall in the Turkish lira against the likes of the US dollar and the euro accentuates that debt burden.

The lira plunged as much as 18% at one point on Friday – the biggest one-day drop since Turkey’s 2001 financial crisis – as US President Donald Trump announced he had doubled steel and aluminium tariffs.

The fallout has been sparked by a number of issues – including Turkey’s detention of an American pastor – while Ankara has demanded the extradition of a Turkish cleric who is blamed by Mr Erdogan for masterminding the failed 2016 coup against him.

The US has also been irritated by Turkey’s decision to buy a Russian missile defence system earlier this year, while Ankara has hit out at Washington’s backing of Kurdish rebels in Syria. Turkey regards the Kurdish fighters as terrorists.