Pope Francis has made a surprise visit to towns and villages hit by the earthquake that killed nearly 300 people in central Italy.

During the visit, which was kept secret by the Vatican, he comforted residents and prayed with them.

He also met rescue workers and thanked them for their life-saving efforts. 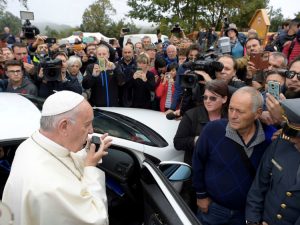 The Vatican issued pictures of Francis standing alone and praying amid the rubble of Amatrice, one of the hardest-hit towns.

Addressing distraught residents with a car megaphone, he said he wanted to come earlier but was anxious not “to bother anyone” until the situation had improved.

“I pray for you. My closeness and my prayers are what I offer to you. May the Lord bless all of you.”

He added: “In this moment of sadness and pain, let’s move forward while remembering our dear ones who died here under the rubble. Let us pray for them.”

Francis spent time in the “red zone” in the centre of Amatrice, which is still closed to the public.

Most of the buildings there were either levelled by the earthquake or are considered too badly damaged to live in.

One parent broke down in tears as he greeted the Pope at a temporary school.

Residents in other towns stopped his car to touch his hand.

The earthquake, which hit on 24 August, flattened several towns and villages in the Lazio and Marche regions northeast of Rome.

Officials estimate it will cost at least €4bn (£3.5bn) to repair the damage.