David Cameron has ordered sweeping changes to legal aid, no-win no-fee agreements and the civil court regime in a bid to stop the witch-hunt against soldiers who were simply ‘doing their jobs’.

In an unprecedented move, the Prime Minister is also threatening to sue law firm Leigh Day to recover millions of pounds it has claimed in costs. 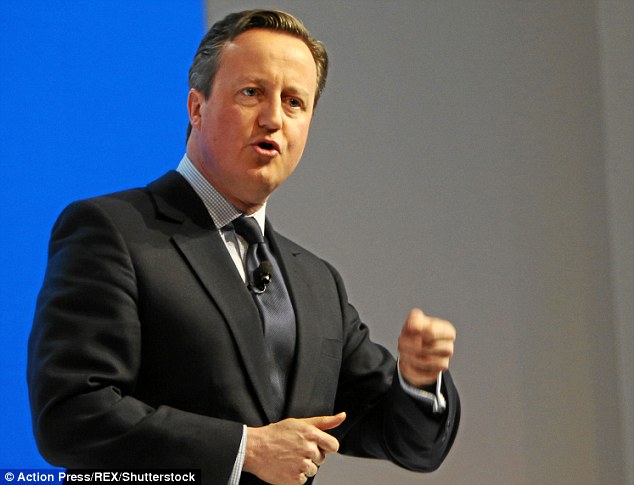 David Cameron (pictured at the World Economic Forum) has ordered sweeping changes to legal aid, no-win no-fee cases and the civil courts in a bid to stop the witch-hunt against British soldiers who were ‘doing their jobs’

The intervention follows a Daily Mail campaign revealing how troops who served in Iraq are being mercilessly hounded by legal aid lawyers.

In a concerted fightback, the PM has instructed officials to:

The blitz – which will be overseen by the National Security Council – will not stop the current controversial inquiry by the Iraq Historical Allegations Team (IHAT).

Whitehall officials have been warned that scrapping the probe before it is completed would be fraught with legal difficulty, and could even lead to the UK being dragged to the International Criminal Court at the Hague.

But the crackdown is designed to have the twin effect of stopping more claims entering the system, and to stop spurious legal challenges being lodged when IHAT decides a claim is unfounded.

Taxpayers’ money has been used to launch more than 1,500 compensation claims on behalf of alleged victims of mistreatment. Mr Cameron’s aim is to prevent such witch-hunts from taking place again, by choking off access to the public money the lawyers rely on.

A No 10 source said: ‘The Prime Minister is deeply concerned at the large number of spurious claims being made against members of our Armed Forces.

‘He is absolutely clear that action needs to be taken and has asked the National Security Council to produce a clear, detailed plan on how we stop former troops facing this torment.’

Mr Cameron’s aim is to prevent witch-hunts against British soldiers from taking place, by choking off access to the public money the lawyers rely on. He is said to be ‘deeply concerned’ at the number of spurious claims

A guardsman who was cleared of the manslaughter of an Iraqi looter ten years ago but faces a third investigation into the incident hopes he will now be left alone.

Joseph McCleary, 34, along with two other soldiers, faced a court martial in 2006 after an Iraqi teenager they had arrested drowned in a canal.

They were cleared of any wrongdoing, but the case was taken to the Iraq Historical Allegations Team.

The Mail informed Mr McCleary, a father of two, that IHAT was examining the case in April last year – 12 years after the incident – but he knew nothing about it.

He said of the Government announcement: ‘It is fantastic they are trying to put an end to all of this. For soldiers having to go to war and then come back to all of this years later is so upsetting. They make you feel guilty even though you have already been cleared of wrongdoing.’

Mr McCleary’s case has been referred to the Iraq Fatality Investigations inquiry in London.

Key to the crackdown – parts of which will be fast-tracked on to the statute books this summer – is putting in place a new time limit for making legal claims.

By putting a cut-off point of, for example, two or three years, it would no longer be possible to lodge claims against troops who served in Iraq. It would also prevent a repeat of the lengthy probe which has taken place into Iraq following any future military action by Britain overseas.

At the same time, people who have not been resident in the UK for 12 months will not be entitled to legal aid. This would strip away the incentive for lawyers to hunt for cases in Iraq or Afghanistan as there would be no money in it for them.

So-called no-win no-fee agreements, known as conditional fees, face a complete overhaul. In instances where cases were allowed to proceed, lawyers would get only their costs plus a small fee – again removing much of the financial incentive to hound the UK’s soldiers.

And in what would be a legal first, No 10 is also plotting to take draconian action against Leigh Day which – along with Public Interest Lawyers – has led the charge against British troops.

Leigh Day has been referred to the Solicitors Disciplinary Tribunal as a result of the failure to disclose a key document to the Al-Sweady inquiry, which examined claims that British soldiers went on a killing and torture spree following a fierce battle in southern Iraq in 2004.

The document – which showed that the claimants had been members of the Mahdi Army, and not the innocent civilians they made themselves out to be – could have brought the inquiry to an early end.

If the tribunal finds against Leigh Day, Defence Secretary Michael Fallon will be tasked with seeking to recover as much of the £31 million of taxpayers’ money spent on Al-Sweady as possible, including the millions pocketed by Leigh Day.

The Legal Aid Agency has also been asked to review all legal aid contracts to establish whether legal aid should be restricted on an interim basis in relation to any firm under investigation for misconduct, and whether such contracts should be scrapped entirely after disciplinary proceedings have been completed.

‘IT’S ABOUT TIME SOMETHING IS DONE TO STOP HOUNDING TROOPS’

A decorated soldier ‘left to rot’ as ambulance-chasing lawyers repeatedly hounded him over the death of an Iraqi man 12 years ago has welcomed the Government’s announcement.

Former platoon sergeant Richard Catterall shot Muhammad Salim because he was armed with an AK-47 and he believed he was going to kill him and his comrades in Iraq in 2003.

The soldier, then 34, was cleared by a military investigation only to be told the Iraq Historical Allegations Team (IHAT) was investigating the death.

Then, even after IHAT found he had acted in self-defence, he faced another inquiry despite suffering from post-traumatic stress disorder and agoraphobia.

Mr Catterall, 46, said last night: ‘It is about time something significant was done to stop the hounding of troops.

‘It is excellent that they are looking to stop all these claims. Ultimately, though, they should have been there to protect soldiers from the beginning.’

This would choke off Leigh Day’s access to funds, making it harder for claims currently in the system or poised to be submitted to proceed.

The No 10 source said: ‘It would be unprecedented for the Government to sue a law firm in this way – but if they are found to have acted improperly, then it will be the right thing to do.

‘The public, and the soldiers who have been subject to malicious lies, would expect nothing less.’

Officials are also looking at providing more support to IHAT so it can deal with claims more quickly – removing the uncertainty hanging over soldiers, which can currently last for years.

By making it harder for lawyers and their clients to obtain legal aid or lodge a judicial review, it is hoped IHAT will feel more able to promptly throw out spurious claims.

Soldiers who have been subjected to the witch-hunt welcomed the Government’s action.

A soldier quizzed as part of the Al-Sweady inquiry said: ‘This is extremely good news. The time of appeasing human rights campaigners who have ridden this gravy train round the track countless times has to come to an end.’

Mr Cameron has acted after being horrified by a string of revelations in the Mail.

These included that an agent named Abu Jamal, who lives in Basra, is paid £40,000 a year by the Ministry of Defence to ferry around witnesses for IHAT.

According to a grieving widow of a dead Iraqi, the agent, who has handed over 1,000 cases to Public Interest Lawyers and Leigh Day, cold-called her weeks after her husband’s death in 2003. Her testimony was the greatest proof yet that law firms touted for business in the aftermath of the war.

A Leigh Day spokesman said: ‘Over the last 12 years many cases of abuse made against the MoD during the course of the occupation of Iraq have come to light and been accepted by the Government. They include the appalling torture and murder of Baha Mousa in 2003. In addition, the Government has paid compensation for over 300 other cases relating to abuse and unlawful detention of Iraqis.

‘The vast majority of serving Army soldiers do a first-class job in protecting this country but the evidence shows that this is by no means the case for all.

‘No-one is above the law, not us, not the British Army and not the Government. We cannot imagine that the Prime Minister is proposing that this should change.

‘We have made it very clear that we refute all of the allegations that have been laid before us by the Solicitors Regulatory Authority.’

A former British soldier is to be re-investigated over the shooting of a man 26 years ago, it has emerged.

Aidan McAnespie, 23, was killed in Aughnacloy, Co Tyrone, in February 1988 as he walked through an Army checkpoint.

Northern Ireland’s Public Prosecution Service is to re-examine the decision not to proceed with a prosecution against the soldier who fired the shot.

The soldier claimed his hands were wet and his finger slipped on the trigger of his heavy machine gun. He was charged with manslaughter but the charge was later dropped.