Science the senator has reviewed, including a real-world study from Israel, indicates that natural immunity is at similar levels as or even better than vaccination. But U.S. health authorities continue urging everybody, regardless of prior infection, to get a COVID-19 jab.

That makes sense because natural immunity “recognizes the entire virus” while the vaccine was designed to prevent infection from the original form of the virus, he added.

COVID-19 is the disease caused by the CCP (Chinese Communist Party) virus.

The Centers for Disease Control and Prevention (CDC), and top health officials like Dr. Anthony Fauci, have said immunity post-infection exists but is not as strong as vaccination. They have downplayed or dismissed studies like the one from Israel.

Fauci, the longtime director of the National Institute of Allergy and Infectious Diseases (NIAID), said earlier this month he did not have a “firm answer” on why people who recover from COVID-19 should get a shot.

“It is true they do have protection,” he added on CNN on Sunday. But he argued that data does not yet show how durable the protection is and whether it’s affected by different variants of the CCP virus.

“I’m not denying at all that people who get infected and recover have a considerable degree of immunity. We also know—and I think we should not let this pass without saying it—that when you get infected and recover, A, you get a good degree of immunity, but, B, when you get vaccinated, you dramatically increase that protection, which is something that’s really quite good,” he said.

Asked for what informed that assertion, NIAID pointed The Epoch Times in an email to an opinion piece from June that was funded by the institute, an NPR article, Twitter posts by Scripps Research Translational Institute founder Eric Topol, and a Google search for “hybrid immunity,” a term that refers to somebody who recovered from COVID-19 and has received a vaccine.

The CDC has promoted a similar view. Director Rochelle Walensky last month cited a small Kentucky study that researchers said showed people who were vaccinated had more protection than the previously infected and that natural immunity plus vaccines were best.

But others, including some researchers, have questioned the push. Among the concerns: the focus should be on vaccinating people who don’t have natural immunity and remain unvaccinated, including people in other countries. 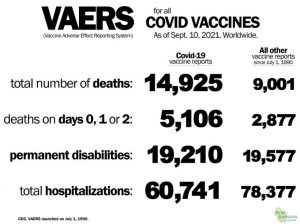 One of Johnson’s main concerns is the huge jump in reports to the Vaccine Adverse Event Reporting System (VAERS), a passive database run jointly by the CDC and Food and Drug Administration (FDA). Between Jan. 1, 1996, and June 30, 2021, the number of adverse events reported following administration of flu vaccines totaled 171,732. In the nine months leading up to June 30, there were over 701,000 such reports for COVID-19 vaccines.

The number of reported deaths post-COVID vaccination, meanwhile, totaled 14,925 as of Sept. 10. Reports of death following every other vaccine were 9,001.

People who have suffered side effects following vaccination “feel abandoned by the drug companies, federal health agencies, and the medical community,” Johnson wrote in a letter this year to Walensky, FDA Acting Commissioner Janet Woodcock, and National Institutes of Health Director Francis Collins.

Federal officials have said there’s no proven link between any of the deaths and a COVID-19 vaccine. They have added some side effect warnings to the labels of vaccines after investigating adverse event reports, including Guillain-Barré syndrome, but are still recommending virtually everybody get a jab.

The CDC still utilizes data from VAERS to evaluate vaccines but also draws from active surveillance systems. It cited data from the reporting system in April when lifting a recommended pause on Johnson & Johnson’s vaccine. Officials with the agency and the FDA regularly use the data in presentations to their respective vaccine advisory committees.

The CDC and FDA did not respond to requests for comment.

Johnson has received little information from the agencies on questions regarding natural immunity, VAERS, and other pandemic-related topics, including early treatment for COVID-19.

The pattern is one of a lack of transparency, the senator told The Epoch Times. He also denounced what he sees as health agencies not focusing enough on treatment.

Few treatments are officially sanctioned for COVID-19 some 16 months after the start of the pandemic, and one of the main ones is being rationed because there’s apparently not enough to go around.

“Had our federal health agencies devoted sufficient effort and research to help develop effective early treatment, thousands of lives could have been saved,” Johnson wrote in a recent letter.

Doctors, that the senator has spoken to, say treatments that have proven successful include vitamin C, vitamin D, and hydroxychloroquine. He plans to send a letter, with Sen. Rand Paul (R-Ky.), on behalf of a group of doctors, to regulators asking for emergency use authorization for budesonide, which has shown signs of working against COVID-19.