Queen Elizabeth bade farewell to Prince Philip at a funeral on Saturday that celebrated his seven decades of service and gave grandsons William and Harry the chance to talk in public for the first time since claims of racism threw the family into crisis.

Elizabeth, dressed in black and in a white trimmed black face mask, stood alone, head bowed as her husband of 73 years was lowered into the Royal Vault of St George’s Chapel in a service attended by senior royals including heir Prince Charles.

Prince Harry, who flew from the United States to attend the funeral, walked and talked with his brother William and wife Kate at the end of the service – the first time they have spoken in public since Harry and his wife Meghan gave an explosive interview to Oprah Winfrey last month.

That crisis came as Philip lay in hospital. Officially known as the Duke of Edinburgh, Philip died aged 99 on April 9.

“We have been inspired by his unwavering loyalty to our Queen, by his service to the Nation and the Commonwealth, by his courage, fortitude and faith,” Dean of Windsor David Conner said.

Philip, who married Elizabeth in 1947, helped the young queen adapt the monarchy to the changing times of the post-World War Two era as the loss of empire and the decline of deference challenged the world’s most prominent royal family.

In 1997, the queen described Philip as her “strength and stay” over their decades of marriage. Now 94, she has reigned for 69 years.

Her husband’s coffin was borne to the chapel on a bespoke Land Rover Defender TD 130 in military green that Philip himself helped to design, as a minute gun fired eight times.

Philip’s children and grandchildren followed behind on foot, evoking memories of the 1997 funeral of Diana when William and Harry – then just 15 and 12 – walked behind their mother’s coffin.

His naval cap and sword lay on top of the coffin, which was covered with the Duke of Edinburgh’s personal standard featuring the Danish coat of arms, the Greek cross, Edinburgh Castle and the stripes of the Mountbatten family.

A wreath of white roses, lilies and jasmine from the queen also adorned the coffin.

There were just 30 mourners inside the chapel because of continuing coronavirus restrictions in Britain. As the service began at 3 p.m.(1400 GMT), Prime Minister Boris Johnson observed a minute’s silence, along with millions of Britons.

Before the procession, military bands spaced out across the quadrangle of Windsor Castle in brilliant sunshine to play the prince’s chosen music, including “I Vow To Thee My Country”, “Jerusalem” and “Nimrod”.

The four-person choir sang a sailors’ hymn, “Eternal Father, Strong to Save”. Shortly before the coffin was lowered into the Royal Vault, the Russian “Kontakion of the Departed”, a hymn of the Orthodox and Eastern churches, echoed around the ancient church. 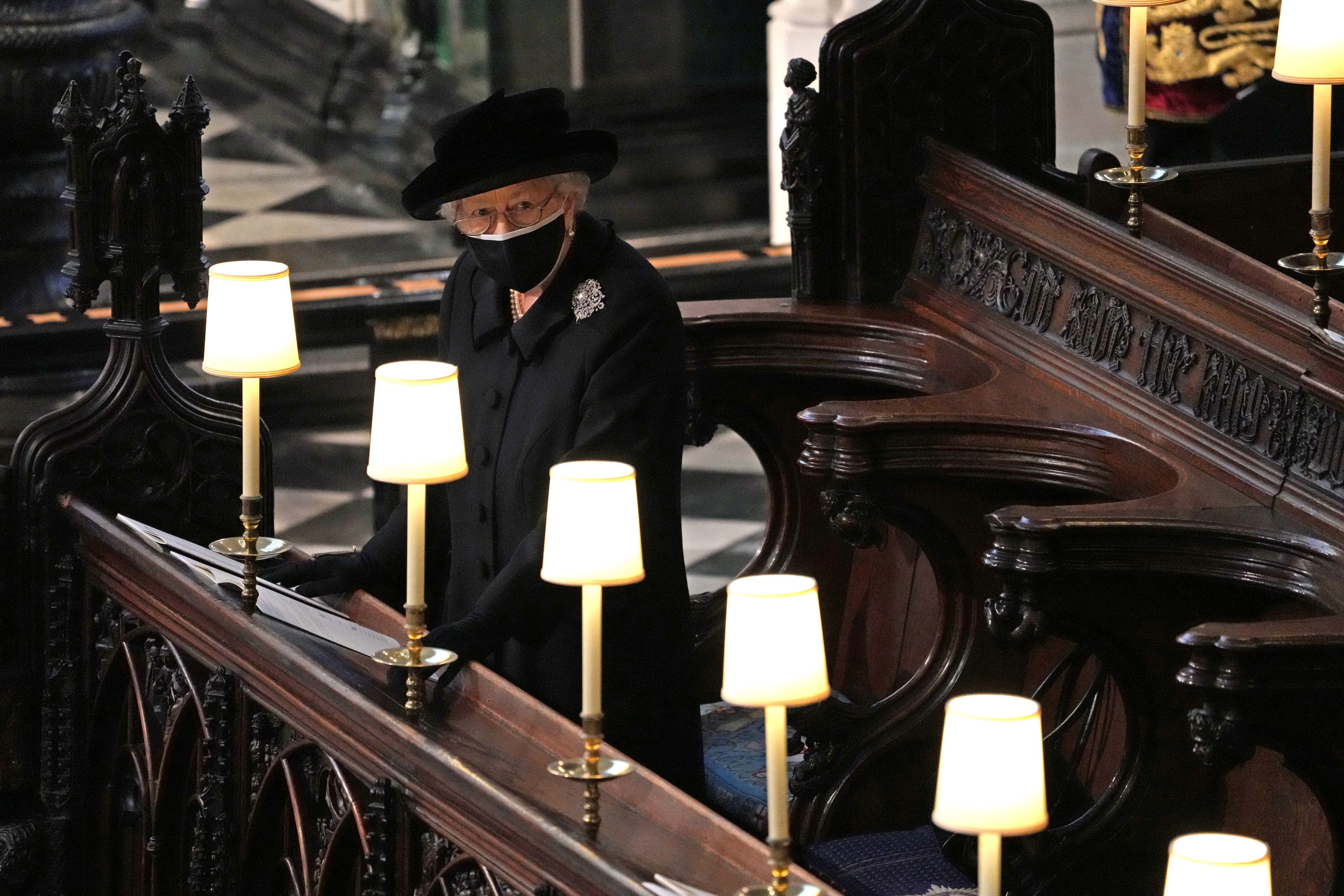 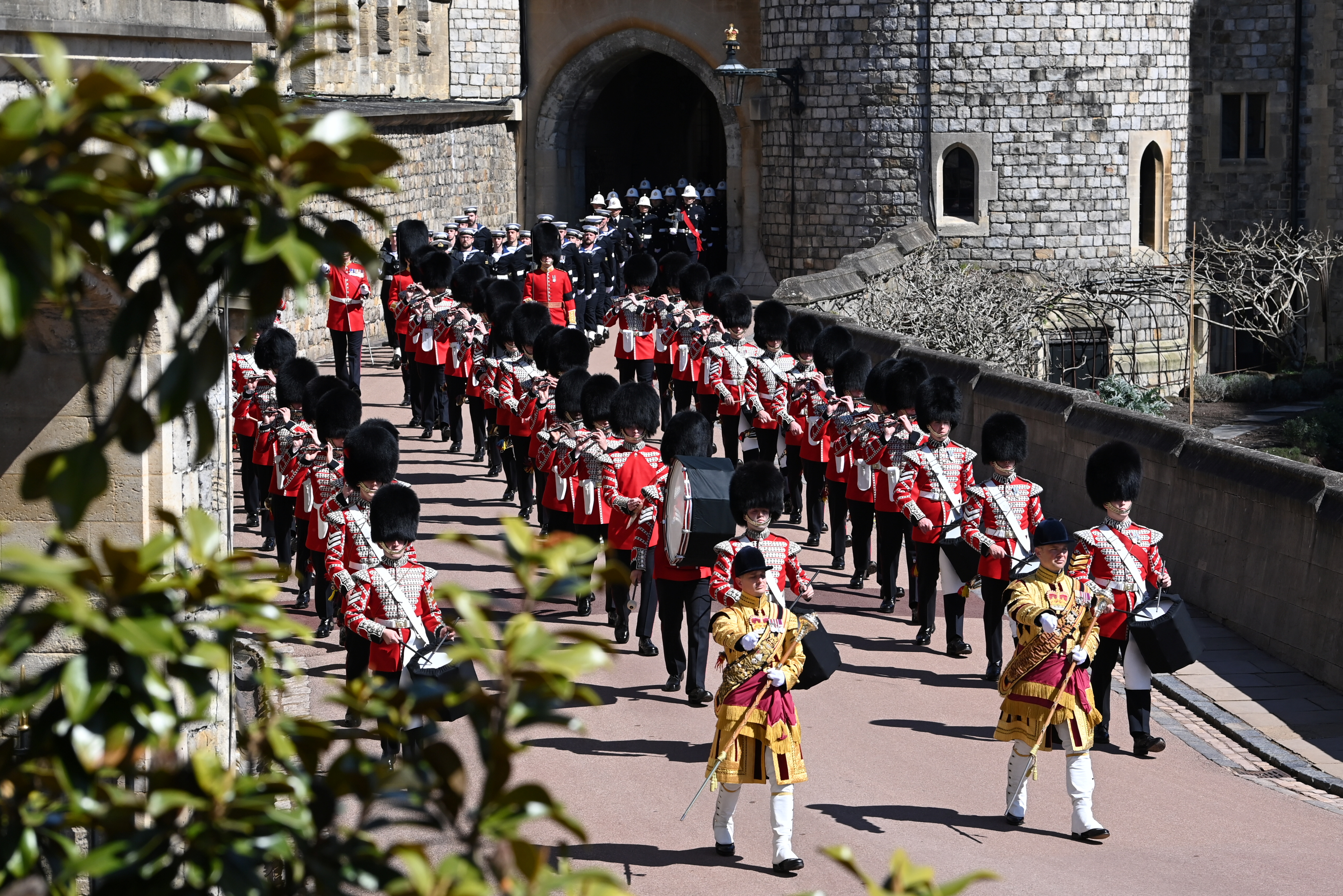 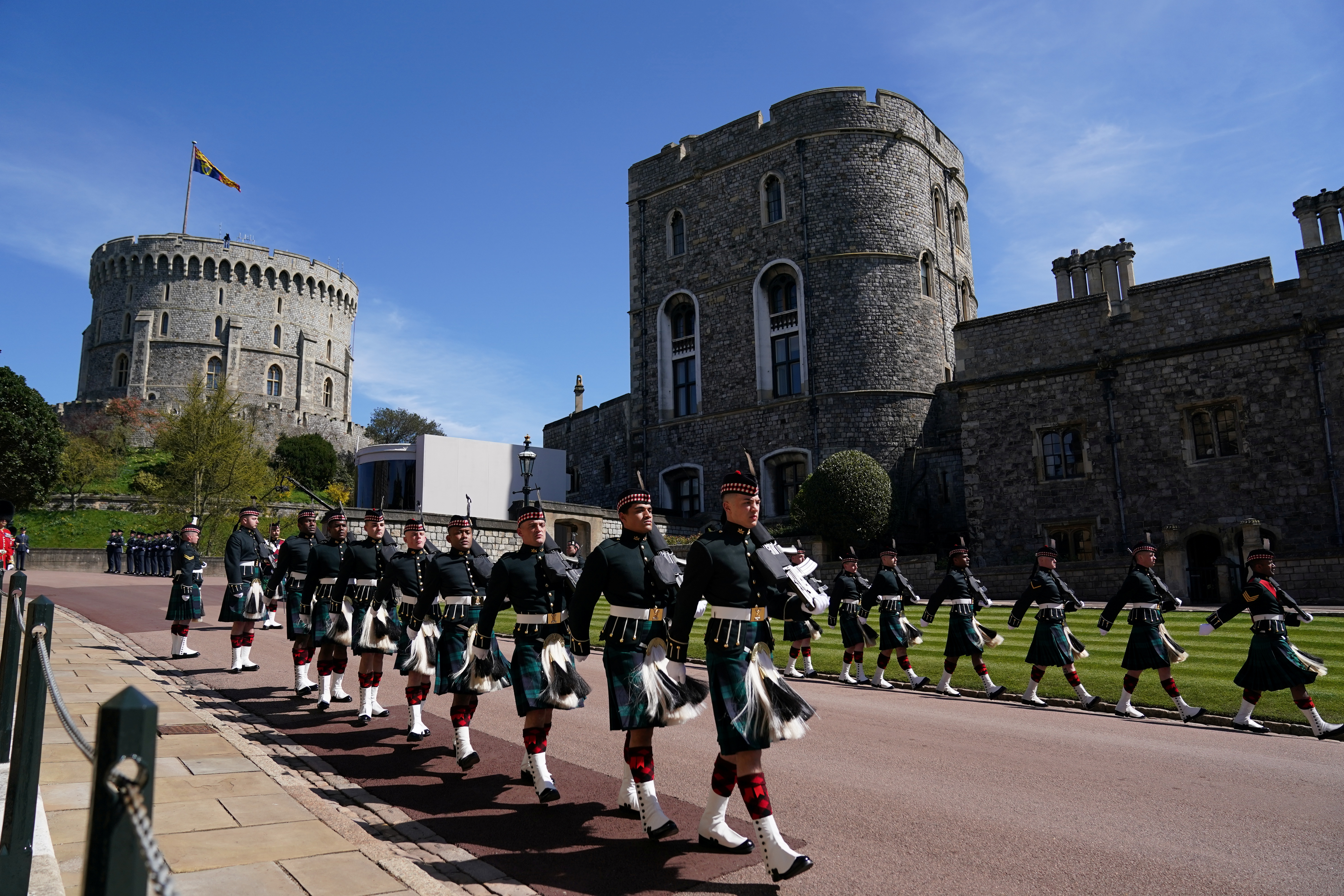 Members of the military march on the grounds of the Windsor Castle as the Royal Standard fag flutters on the day of the funeral of Britain’s Prince Philip, husband of Queen Elizabeth, who died at the age of 99, at Windsor Castle in Windsor, Britain, April 17, 2021. Leon Neal/Pool via REUTERS

There were no eulogies, just brief words of praise for the prince from the dean of Windsor and Archbishop of Canterbury Justin Welby in their prayers.

Elizabeth has been widowed just as she grapples with one of the gravest crises to hit the royal family in decades – allegations of racism and neglect by it from Harry and Meghan, his American-born wife.

In last month’s interview the couple, who quit royal duties and moved to California last year, laid bare their perceptions of the family’s attitudes in what amounted to a critique of the old-fashioned customs of an ancient institution.

They accused one unnamed royal of making a racist comment, and said Meghan’s pleas for help when she felt suicidal were ignored.

Meghan said she had been silenced by “the Firm” while Harry said his father, Charles, had refused to take his calls. Harry said both Charles and his brother William were trapped in the royal family.

Meghan, who is pregnant and was advised by her doctor not to travel, watched the funeral at home in California, a source familiar with the situation said.

As the service ended, buglers from the Royal Marines sounded the “Last Post” and then “Action Stations” to honour the late duke’s World War Two naval service, before choir sang the national anthem.

Elizabeth left for the castle’s apartments in her car but other royals decided to walk up the hill to the main part of Windsor Castle.

William, his wife Kate, and Harry chatted as they walked. Kate, Duchess of Cambridge, swiftly stepped away to allow the brothers to talk further. It was not possible to hear what they were saying.

The palace emphasised beforehand that while the occasion would have the due pageantry that marks the passing of a senior royal, it remained an occasion for a mourning family to mark the passing of a husband, father, grandfather and great-grandfather.

Mourners eschewed the tradition of wearing military uniforms, a step newspapers said was to prevent embarrassment to Harry, who despite serving two tours in Afghanistan during his army career, is not entitled to wear a uniform because he was stripped of his honorary military titles.

Prince Andrew, who stepped down from public duties in 2019 over controversy surrounding what he termed his “ill-judged” association with late U.S. financier Jeffrey Epstein, had wanted to wear an admiral’s uniform at the funeral, media reported.

Andrew sat closest to the queen.

Philip’s dedication to his duty earned him widespread popularity in Britain, but he was also criticised by some for a number of off-the-cuff racist or abrupt comments which shocked princes, priests and presidents.

“He was authentically himself, with a seriously sharp wit, and could hold the attention of any room due to his charm and also because you never knew what he might say next,” Harry said earlier this week of his grandfather.