Is it just the injuries? Is it just the schedule? Is it enough simply to say that, given the way they play, given the fact they have been without their three first-choice central defenders for large parts of the season, that Liverpool have been up against it and that, given more normal conditions, they will rise again? Or, after their 4-1 defeat against Manchester City on Sunday, is there something more serious going on?

First, what Roy Keane would dismiss as the excuses. They have been unlucky with injuries, less in their number than in their concentration at the heart of the defence: Virgil van Dijk, Joe Gomez and Joël Matip have begun just 22 league games between them this season. Liverpool, as a result, have had 12 starting centre-back pairings and, given that has frequently involved Fabinho or Jordan Henderson dropping into the back four, that has had a knock-on impact in midfield. 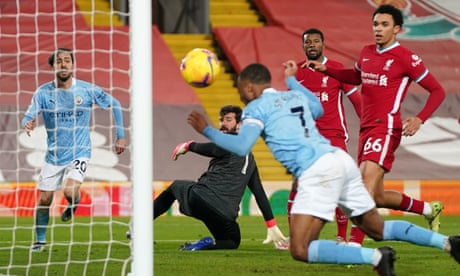 In a team as interconnected as Liverpool, that is always going to have an impact, a change in one part of the mechanism having serious ramifications elsewhere. For sides that play an intense and sophisticated pressing game, the compressed nature of the calendar is going to have more of an impact than for those who play a less dynamic integrated style, or who are less reliant on specific preparation for each individual match.

But just because that is true does not mean there may not be other, deeper-lying factors at work. Jürgen Klopp’s recent spikiness is perhaps indicative of his frustration, of an awareness that this might be more than a blip. The disagreement with BT’s Des Kelly came after a 1-1 draw against Brighton at the end of November. Since then there have been spats with Chris Wilder, José Mourinho and Sean Dyche before last week’s bizarre and inaccurate claims about City’s comparative schedule. In that time Liverpool have won just five of 14 Premier League games.

But dramatic as the recent downturn has been – three home defeats in a row after 68 unbeaten, just nine points from their past nine league games, in five of which they’ve failed to score – it has not come entirely without warning. Since beating Leicester 4-0 on Boxing Day last season, the path has been downhill. That was a remarkably high starting point, and Liverpool did win their next nine league games, but they were not playing with quite the same verve and fluency as they had towards the end of the first half of that season.

They were scratchy after the season restart, but with the title effectively already won, that was understandable enough. This season, it should be remembered that the 7-2 defeat at Aston Villa came before Van Dijk’s injury – but again there was a ready explanation in the difficulty of organising a press in the current circumstances. Not all excuses are invalid, whatever Keane may say, but Liverpool have not quite been at their best for more than a year now.

It may simply be fatigue – mental as much as physical. This is a side, after all, that had been approaching the summit for three years: Champions League final, Champions League victory, a first league title in 30 years. The core of the team has not changed in that time: if, in the face of adversity, they go to the well again and find this time it is dry, it’s perhaps no great surprise. Béla Guttmann’s maxim that “the third year is fatal” is usually applied to managers, but it can also be true of players.

Entropy is the curse of all football teams and Klopp perhaps recognised that when he signed Thiago Alcântara. There has been criticism that he slows the game down, but that is precisely the point: to help Liverpool protect possession and win games without playing constantly at full tilt. Integration has been complicated, though, by the fact he has constantly been playing in a patched-up midfield. Only once this season he has been able to start alongside Henderson and Fabinho in midfield – and that was in that fateful game at Everton in which Van Dijk was injured. 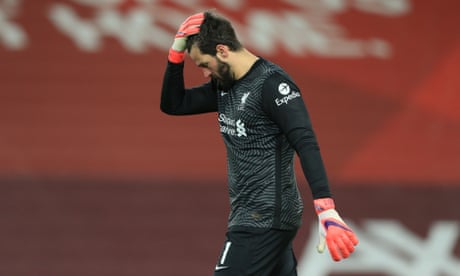 If a team go unchanged for too long, opponents get used to them and staleness can set in. The 4-3-3 has remained almost constant, and Klopp has adapted his press far less than, say, Pep Guardiola. When it works, as against Tottenham, the results can still be impressive, but Sunday suggested a weariness about them.

As a study in the Athletic last week noted, despite all the injuries, seven Liverpool players have still played 80% or more of this season. More concerning, perhaps is the fact that, weighted by minute played, this is the oldest squad in Liverpool’s Premier League history – and only some of that is down to James Milner.

Roberto Firmino was 29 in October. Sadio Mané will turn 29 in April and Mohamed Salah in June. Individually, none of that is cause for concern, but a united growing old together is a worry, particularly when this is a fourth season together. Takumi Minamino was an attempt to freshen that up but, for whatever reason, he hasn’t worked out while Diogo Jota, who had added new life, has been injured since the beginning of December.

Which perhaps brings us back to where we came in. Liverpool have been unlucky with injuries but that misfortune has highlighted underlying issues with a squad that has probably just passed its peak.