Arsenal are pushing to sign the Real Madrid playmaker Martin Ødegaard on loan for the rest of the season, with optimism growing there that they will beat Real Sociedad to his signature.

Ødegaard has been made available for a short-term transfer and would, at least until the summer, provide a high-quality solution to Mikel Arteta’s shortage of creative options. Sociedad, with whom he enjoyed an excellent loan season in 2019-20, are keen for his return but Arsenal hope he will opt for a complete change of scenery. 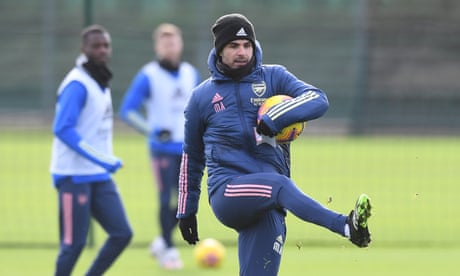 Although there is plenty to be done before Ødegaard’s arrival is close, the 22-year-old’s signing would hold significant intrigue given that he has shown clear signs of realising the promise that led him to join Madrid at 16.

He has featured only nine times in Spain this season, along with appearances for Norway, and would provide a valuable option for an Arsenal side who have become increasingly reliant on Emile Smith Rowe’s attacking midfield performances in recent weeks.

Arteta had been tight-lipped when asked on Thursday about any interest in pursuing Ødegaard.

Arsenal confirmed a different loan signing on Friday, with the goalkeeper Mat Ryan joining from Brighton for the remainder of the campaign. Arteta had been seeking experienced cover for Bernd Leno, lacking since Emiliano Martínez departed for Aston Villa in September, and moved quickly when it became clear Ryan was available.

Ryan, an Australia international and boyhood Arsenal fan, has made 123 appearances for Brighton since joining from Genk in 2017 but was dropped by Graham Potter after the 3-0 defeat at Leicester on 13 December. It was made clear that Robert Sánchez would be Potter’s first choice from thereon so Ryan will hope to carve out a niche at Arsenal. He is available for Saturday’s FA Cup fourth-round tie at Southampton.